The event started with an introduction from me, as my final responsibility as Chair before handing over to Ian Gardner. I highlighted the acheivements of the year and as a club we have never been stronger, I also reminded the members that we need to continue the good work we do in training, charity and community. We have a good name in the community from the work we do with Scouts and local groups and we will continue this in schools and in the upcoming year with the Youth Offenders Trust.

The Chairman’s Ball is a night to celebrate, to think about the diving from the previous season and plan ahead for the next. We started the evening with qualifications gained by members in the year. Afterwards, trophies were presented by the committee

This is the only award that is decided by the club, it is given to someone that the club members feel has contributed to the club on a regular occasion, this is voted upon on the evening of the AGM. It is given to a member who has contributed to the club time and again and sets a fine example to fellow members. The club member chosen this year was Lee and Lynn.

This is the award that I have the pleasure in giving and choosing. This is along the same vein for contributions to the club, traditionally given to a member who rather than merge into the background and get a feeling for the club, they have rolled up their sleeves and helped to progress the club.

This year there are so many club members that I could choose from:

Obviously any of our terrific instructors who countless volunteer time and effort to help support trainees and the club.  Of course I could choose any of our committee members who give up time and effort as well as  our terrific members who never complain with new initiatives or our latest scheme to raise money for the club. In a club like ours, I could keep going on with so many wonderful members to choose from but in the end I came to the decision to present this trophy to Chris Heywood.

Our Diving Officer Alf Draper had the priviledge of picking the award for best newcomer. Here are a few words from Alf.

I chose Melissa after diving with her at on our trip to Porthkerris last October on a 20m drift dive (her first drift dive). It didn’t phase her one bit and she took the challenge head on. Also on another trip to Salford Quays she dived in zero visibility conditions and became separated from her buddy, yet remained calm and didn’t panic. After only just passing her Ocean diver a few months ago she definitely has taken to the water well!

Again Alf had the honour of giving out this trophy.

This award I chose Lee Bevan, not for his involvement in raising funds for the club which he has done a terrific job of doing so far, but purely for his enthusiasm towards diving and striving to do it right whether it be on a dive, or teaching snorkellers in the pool.

This is a sort of underwater assault course that is attempted by buddy pairs, we run this on the first Wednesday of every month. Any paid up club member is welcome to take part and we have a leaderboard on our website. Following a few valiant efforts this year the winners were Ricardo Alencar and me with a time of 4 minutes 23 seconds.

As any diver knows, no dive outing is perfect and at times there are mishaps, this is why we have the Wooden Weightbelt prize. As you can imagine there were a few nominees:

Nick had mistaken a lobster pot line for a wreck buoy once or twice.

Gary had been so eager to jump in for a dive up in Eyemouth that he had jumped in without his fins.

I had managed to get nominated, something to do with a slightly open zip on a dive- I deny all knowledge of this!

Gerry had gone up to dive and managed to had the wrong hose fitted, meaning he couldn’t dive and on top of that he forgot his air cylinders at Capernwray too!

In the end the ‘winner’ of the Wooden Weightbelt was Gerry McAvoy.

Once the awards and qualifications were all handed out we enjoyed the musical talents of club member Roger Troman, who entertained the room for the rest of the evening until he was interupted with the food, curry and hotpot this year, and the traditional Whiskey Shove. Roger then continued his set until later in the night, the room was filled with people dancing, people laughing and, of course, people talking about diving!

ALL POSTS BY Adam Chase 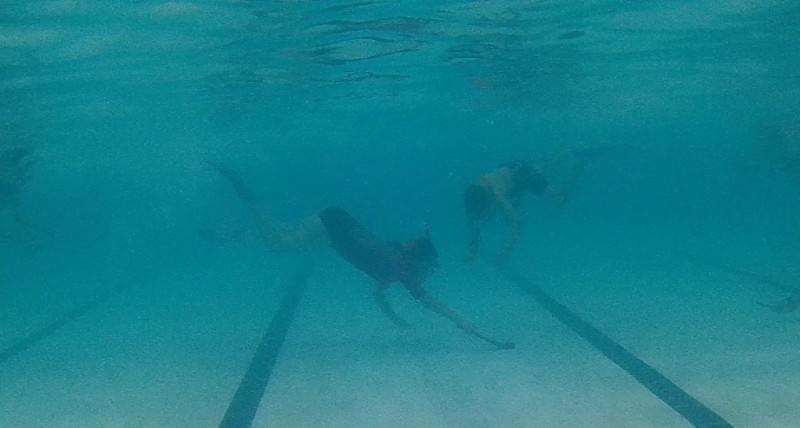